Recognizing the Signs of Hydrocodone Overdose

Hydrocodone is a powerful painkiller that can cause a number of serious side effects when excessive amounts are taken. When someone intentionally or accidentally ingests, injects or otherwise uses too much hydrocodone, the risk of overdose and serious complications resulting from overdose increases drastically. There are several signs of hydrocodone overdose that you may be able to spot if you know what to look for. 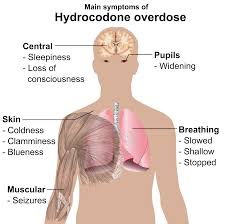 The sooner an overdose is identified, the sooner a person can receive the help they need.

According to Medline Plus, “hydrocodone overdose occurs when someone intentionally or accidentally takes too much medicine containing hydrocodone.” This can happen accidentally or it can be the result of the person attempting to hurt himself or it may happen as a result of the user attempting to “get high” on hydrocodone. Regardless of why overdose occurs, it’s important to watch out for these sure signs of trouble:

According to Medline Plus, symptoms of hydrocodone overdose can range from mild sleepiness to extreme sleepiness that leads to unconsciousness. If you notice that someone who has taken Hydrocodone is falling asleep, cannot stay awake and seems dizzy or overly weak it may be time to seek prompt medical help.

The most dangerous complication that comes as a result of hydrocodone overdose is related to the effects that this drug has on the user’s ability to breath. If someone has taken an overdose amount of Hydrocodone, they will likely show signs of labored breathing, respiratory depression or shallow breathing. You may notice that their breathing slows down significantly or stops completely in which case it’s time to seek help.

Moderate to severe confusion, not knowing where one is or who they are, are common signs of Hydrocodone overdose. Confusion is often an outcome when too much of a drug is taken. If confusion persists or causes an individual to react oddly or in a dangerous manner toward things that are otherwise not dangerous there could be a big problem at hand.

If you were to look into the eyes of someone who is under the influence of hydrocodone, you would see that their pupils are like pins. Hydrocodone overdose often leads to “pinpoint” pupils that are very difficult to see. The individual may look almost like he or she doesn’t even have any pupils.

If you think someone has overdosed on hydrocodone, the best thing you can do is seek immediate help. Medline Plus recommends that you take the following actions before calling for help: